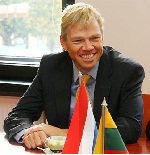 Studying abroad can help you find your way in life. You can use it as a compass!

You can not overestimate the importance of education in one’s life. One of the main things in life is to live to the fullness which includes that you get out of it the maximum that you can achieve. It is sad when a person during life realizes if I had only studied this or done that it would have been much better. What type of work you will do heavily depends on what you have studied. In other words, it is really crucial for your job opportunities that you choose a study which, first of all, fits well with your abilities and with your preferences. It is essential that you enjoy your work, so make sure that you study something you can use in the future. I think many people see education only as a tool but it is just a part of the story. If you choose the right study you can really have fun while studying as well.

On the one hand, you should look at studying abroad as investment. It broadens your horizon if you do not only look within one educational institution or one country but actually expand your horizon to see what other institutions in other countries have to offer. It makes the education more valuable. But apart from that again education is not only a tool but also something important by itself. It is great fun to be able to experience life while studying abroad. Many students are afraid to do this which is understandable because it’s a ‘dive in the deep’. But sometimes you have to dare: ‘no guts, no glory’. You meet new people, see new things and it refreshes the mind. I think I could advise anyone to do this because personally I had very good experiences in this field.

Talking about Dutch educational system, it is good, professional and solid. The Netherlands has been investing a lot into educational system – ca. 5% of national income goes to educational system. Our economy is very strong, we are known as very innovative country with good performances in terms of high-techs, water management, farming, engineering, arts and design. Netherlands shows many good results in these fields that are known well over the world and this has a lot to do with our educational system. The fact that our economy is 16th in the world proves it. It has to do with basis, the fundament which is the education. And here we have heavily invested in our universities, higher schools. We are now also highly investing in attracting foreign students to these institutions. More than 1500 programs in Holland are fully in English ranging from shorter courses to full-term studies – Bachelor’s and Master’s levels. With that we are the front runner in Europe. We have always aimed at making our universities more open to foreign students because we believe that we can offer foreign students something that will broaden their perspectives and horizons. We also benefit from foreign students coming in just as we benefit from immigration from other countries to the Netherlands, integrating and working in the Netherlands. We believe in a multicultural society and an open economy. This is a two-way street - we go abroad to trade and study and we want to be open for students and companies coming to Netherlands.

The main reason why students should choose studies in Netherlands is that we have a huge choice of study programmes in English in every field. Whether you are talking about law, business administration, management, economy, technical sciences, engineering, arts, culture and languages – no non-English country has such a large offer in English programs as Netherlands. That is one good reason. Another one is the high level of studies. Many Dutch higher education institutions are in the top 200. And then there are the facilities. Having invested so much in our educational institutions, they all have very good facilities for housing, leisure activities, libraries. Infrastructure for students in Netherlands is very good. Last but not least – it is a very easy-going country. As a student you want to do more than study. There are other things to do. You want to meet a lot of people and have a good beer together.

I do not think that there is anything that can shock foreign students in Netherlands. I have been in Lithuania for one year now and I see more similarities between our two countries and the way we are than differences. When I talk to students here, they have the same ambitions and the same drive that I see in the Netherlands. This is a generation that is growing up together thanks to the globalizing world, all the possibilities to communicate quickly with each other using the Internet. You really see that the borders in Europe are disappearing and we are much closer to each other than we sometimes think. Of course, there are some differences here and there. One of them, I think that Lithuanian people are often too modest in a sense that, for example, when it comes to language. People often tell me they don´t speak or write in English while it turns out they do. Sometimes there is a lack of confidence. But if you see what this country has been doing for the last 20 years – going from Soviet Republic to an independent country, now a member of NATO with its own PRT in Afghanistan, a very highly respected member of the European Union – all of this in 20 years – that is a huge achievement! I think Lithuanians have lots of reasons to be very proud and take more confidence that they can do a lot of things. The Dutch have plenty of confidence. They are sometimes the opposite, they will say: yes, I speak English, French, German and then when you really test them, the languages are not so good. But you know – the glass is half-full or half-empty. So to Lithuanian students going to the Netherlands I say: do not be afraid, do not think you can not speak the language or compete with Dutch students!